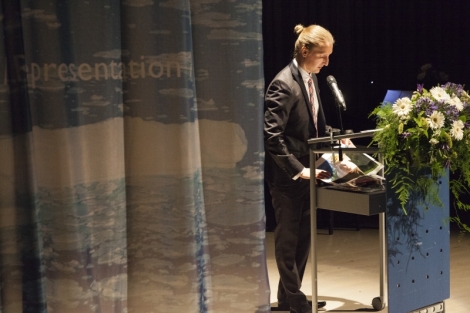 You can let loose a bit right know – the hard part is over. Focus on this moment. You have graduated now, be happy with yourself and enjoy. Seize the day like Esther the Wonder pig! Surely, you remember that a pig, don’t you?! Yes, I used a lot of animal videos to say something important or just so we could relax for a while in our Homeroom sessions every Tuesday. I will get back to that pig in a moment.

We met for the first time two years ago. In your three-year high school the first year your homeroom teacher was Ulla. Then, I went on as Ulla started a study leave. She sends her “very best wishes to all the celebrants”.

The two-year IB program was about to start and the atmosphere was maybe a little bit tense. You knew that the next two years would certainly require work, and especially a lot of self-study, as the IB program aims to make you independent scientific thinkers. It is a tough international high school education that prepares you for further academic studies and to be world citizens. 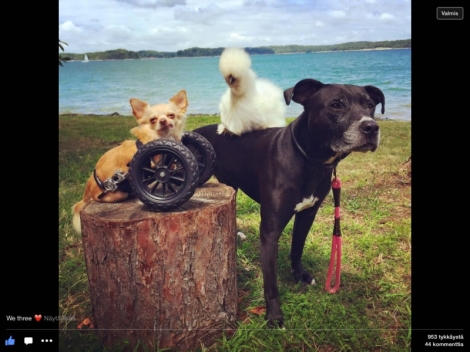 One of Atte Tahvanainen’s animal pictures from the net.

Back to the first moments. I started with a few animal pictures. Do you remember? Maybe you thought I was crazy or maybe the pictures of animals made you relax a bit, but I actually had a point, too. I used animals, pigs, cats, monkeys, sausage dogs – you name it – to emphasize something important related to the school or to give one of my many motivational speeches. I will continue on the same line to the end! The first picture was about being together and doing things together. (explain what’s in the picture). I said that everyone of you is different, but nobody can do it alone.

The IB program is a joint effort – and so is life after it. It was the first thing, I wanted to say to you and I kept repeating the same theme several times during our homeroom lessons. And I will return to it once again now, but in a slightly wider sense. Let me tell you something: ”Kindness is magic”. This is said by Steve Jenkins, a Canadian who took Esther wonder pig. I showed you this picture in the first homeroom.

The World famous Esther has many lessons to teach us.

A little bit about Esther. In the summer of 2012, Steve Jenkins and Derek Walter took a micro piglet. It turned out there was nothing ”micro” about Esther, and Steve and Derek had actually signed on to raise a full-sized commercial pig. Within three years, tiny Esther grew to a whopping 600 pounds. For many, this situation would certainly have been a terrible shock and so it was for them, too, but they did not give up. Actually, they started a Facebook page – and it went viral. They became advocates of animal rights and Esther became a symbol of this cause. Now they own an animal sanctuary and post pictures and videos every day spreading the message about animal rights, equality and humane values through Esther’s social media networks. 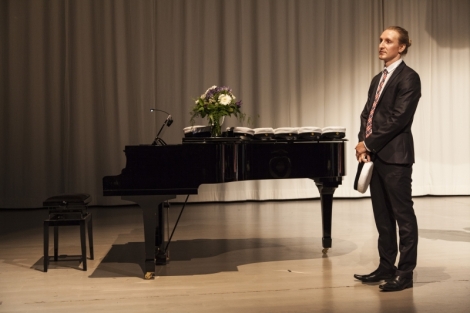 Atte is ready to give the traditional cap to the graduates. Kuva: Juha Rantanen.

Generally, I believe good things happen when you take care of others and treat all people as equal. According to happiness studies, helping and socializing with others will greatly increase happiness. Modern life in Western socities easily creates an ongoing cycle of competition and egosentrism, where individuals are trying to survive alone and even trampling on others on the go. It often links to profit-seeking goals, material values and the desire for being superior to others. Then, there are softer values.

The IB learner profile is actually reflected in many very humane values. For example, key words in the learner profile such as caring, reflective and open-minded are such values. I would like to think that we teachers here at school are not only to help create academic thinkers, but also to encourage students to respect other people and cultures and to embrace diversity in the world.

This is the moment! Kuva: Juha Rantanen.

Back to the first day. You were nervous and suspicious of me (joke!), but also happy to see each other. It created an atmosphere, which I thought was a good basis for the upcoming rush, stress and frenzy of deadlines. There are tight friendships and small groups within your group and it really seems that you are close to each other. Embrace it. In fact, I regard old friendships as one of the most important things in my life. Sometimes I wonder what would I be without these relationships and my lovely wife. 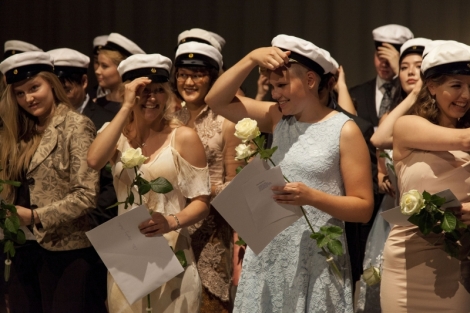 You are now turning a new page in your lives and planning a new beginning. What to do in life and how to achieve dreams and important goals in life, are now in your mind. Some have already begun their studies or the army, some have a gap year and have started working or hope to get a job. Planning is good.

However, a little bit about Esther, still. What if you someday get a micropig that turns out to be a full size commercial pig or something else changes your life totally? You all studied psychology at least one course, but especially those 26 of you, who studied it more, know that where complex psychosocial phenomena are concerned we cannot draw direct cause-effect relationships. They appear more in correlations, the same way as if you are kind, it is more likely that you will be treated with kindness.

The Principal Ar Ranki leads the graduates to the auditorium. Kuva: Juha Rantanen.

Planning contains the so-called causality problem, because there are many ”third variables” in life. Things do not always go as planned. And as you have read psychology, you know, it’s not usually the happiest who avoids rocks on their path, but the one who can get up afterwards and move forward. The ability to survive and move on is important. Scientific studies have shown that especially the positive impact of social relations is great, if you fall down.

Plan. But dare to look at where life takes you. According to one of Esther’s philosophical statements ”Everyday is a holiday”. I think, in our time, it doesn’t come naturally to us humans to be constantly in this moment. How to be present in the moment so that life can be enjoyed right now and every day. For example, mind-fullness has been very popular lately, when busy people are looking for clear guidelines to seize the moment and a quick fix to release the stress of everyday life. For some it works and good for them. The fact that people need guidance videos and rules to be able to free their mind for once, however, tells us how difficult it is for us people in modern life to stop and experience the moment, without stress, hurry and obligations.

I hope wherever you go, whatever you do, you could experience that feeling that every day is a holiday – at least once in a while. Perhaps, everyday could be a holiday, when you are surrounded by the significant others and once you live up to the values and standards you have set for yourself in life. Like Esther has. Believe in making solutions in life that will increase your own well-being, do not stay in a situation where you don’t feel good. Believe that you can change it. Believe in making your own decisions about your future. Look for things in life that you feel important and a part of who you are. Be true to yourself. This is what I really hope for you.

As a last thing – and this also comes back to the first day, when I talked to you about the meaning of the IB: what is left of these years for you? I hope lifelong relationships and the intellectual capital described in the IB learner profile. But, from the viewpoint of the teacher, and especially the psychology teacher, I would like to highlight the benefits of high-quality information processing and academic-type studies for your life. Of course, you certainly learned a lot of individual things, such as concepts and theories like: schema theory or cell theory or hubris or fusion or quantum mechanics. It’s great that you learn them. Although, it may be difficult to recall everything, memory works so that detailed study of things has left memories that are more easily activated, if they are needed. In addition, you have developed a wider overall picture of the world and different fields of sciences. 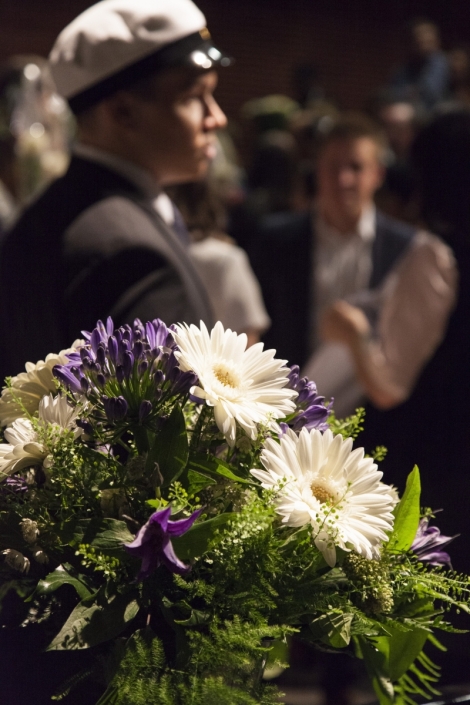 But above all, the IB’s highly demanding and high-quality studying developed your abstract thinking. It has made your information processing and problem solving more creative than ever before. It has also created the foundation for building something new as you go further in your studies. It is based on this three-year training camp you just finished. So, what’s left of these years is a lot. Maybe occasionally you go back to these times in your mind and walk down memory lane. You may remember some of the animal videos I showed during the homeroom, like Esther, maybe even me and the other teachers. But what I really hope, when you look back, is that you would feel you also grew as a person and as a human being during this time.

And remember, you can be anything you want so, why be anything but kind? I wish you all the best my dear IB14 group.”